Aisle and Isle: What’s the Difference?

Aisle and Isle: What’s the Difference?

Being dubbed a ‘crazy’ language by those who are learning it, English has hundreds of homonyms. For those of you who don’t what homonyms are, they are words that sound the same but have different meanings and spellings. These are words that sound alike and look alike. Today, we are going to be talking about two words that are no exception to the rule – Aisle vs. Isle. We pronounce both these words as /aɪl/ or /ayl/. Sounds the same, right? But what’s the difference between aisle and isle?

Finding the difference between aisle and isle can be difficult since only the letter ‘a’ sets them apart. If you’re not sure which word to use and when don’t worry. This is a common question.

Now, let’s find out the difference between aisle and isle. Please get your pen and paper and carefully read the explanation to avoid mixing up these words again next time. 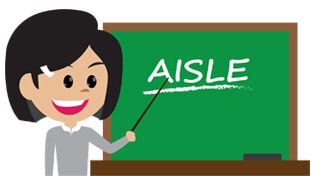 The Meaning of Aisle

An aisle is a long, narrow space between rows of a seat in an aircraft, church, theater, auditorium, or in between rows of shelves in a store. Aisle and isle may sound similar but again, they are two different words.

All heads turned as the bride began walking down the aisle.

I prefer the aisle seat over the window seat when I fly.

Coffee and tea are in the next aisle.

The musical had actors dancing in the aisles.

In a political context, aisle refers to a situation when members of one political party talk about working with members of the opposing party. They often speak about their reaching across the aisle.

In the USA, they often refer to the Republicans and the Democrats as “the two sides of the aisle.”

We need to reach across the aisle to fix this problem.

The metaphorical use of the word refers to the ways parties arrange themselves in meetings of Congress or Parliament, with certain parties sitting on certain sides of the aisle. Because of this segmentation, political opinions or public policies became known as coming from “one side of the aisle or another.”

P.S. When you see people using isle in a political context, it is a mistake. The correct word choice is the aisle.

The Meaning of Isle 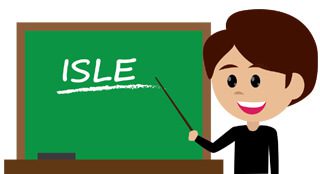 While aisle refers to space, an isle is an island or peninsula, usually a small one.

My father is from the Isle of Man in the Irish Sea.

Castle-hunters won’t be disappointed with the Isle of Man.

However, if you have a hard time remembering this difference, have no fear. Just always remember THIS.

An Aisle is what you find on an Airplane.

On the contrary, an Isle is simply a small Island.

The two words, aisle and isle, may sound alike, but these words have totally different meanings. Many writers aren’t sure when to use the words isle or aisle, but the trick to remember is actually easy.

PrevPreviousWar and Wore: What’s the difference?
NextThe Difference between Cereal and SerialNext