PH among the safest countries in the world

PH among the safest countries in the world

President Duterte admitted he was truly happy after hearing that the Philippines ranked 12th among the safest countries in the world. “I read that in the briefer and it surprised me,” he said. “We are in the Top 50 safest countries. And we are together with countries that are really ideally peaceful,” he added.

Gallup said the number of the common population took part in the survey. The international analytics firm said that “the higher the score, the higher the proportion of the population that reports feeling safe.”

Moreover, President Duterte said that the government has to credit the law enforcers for keeping peace and order in the country.

“If it’s a recent survey, it only shows that, well, we have to credit the police and the military and the other uniformed services of the government who toil to make this country at least very peaceful,” he said.

Furthermore, the news also delighted Presidential Peace Adviser Carlito Galvez Jr. “We are glad to know that the PH ranked 12th and is among the safest countries in the world. Thanks to our law enforcers, peace workers, and everyone who has committed to peace, he said. “Moreover, we are moving forward as a peaceful, progressive, and resilient nation.”

Despite local rights groups are invalidating the result, some are happy with the result. Some clarified that the prevalence of law enforcers does not mean the country is safe. However, some argued that they feel safer every night and they can assure that they are safe. For instance, the ESL industry in the Philippines has also been seeing an impressive increase since Duterte became the President. Foreign students clarified that the country has become safe than several years ago. As a result, education tourism in the Philippines has been in a constant boom in recent years.  Indeed, foreigners agreed that the result is right though the level of safety in each place may still vary. 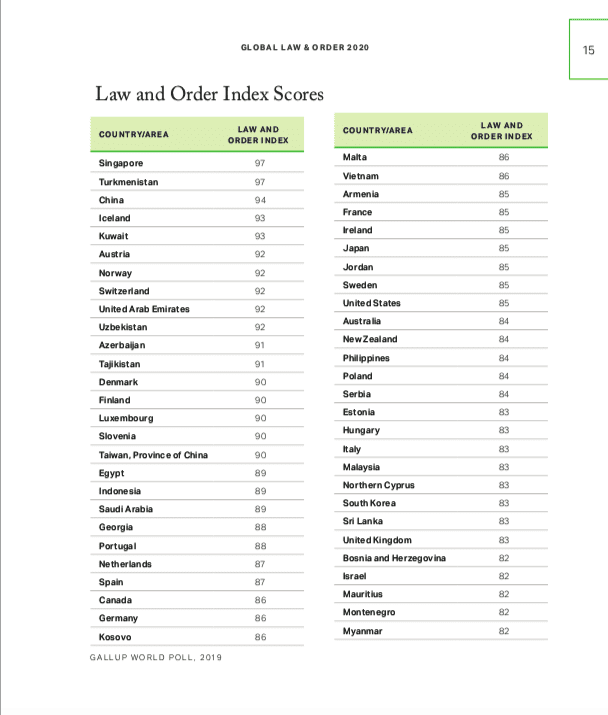 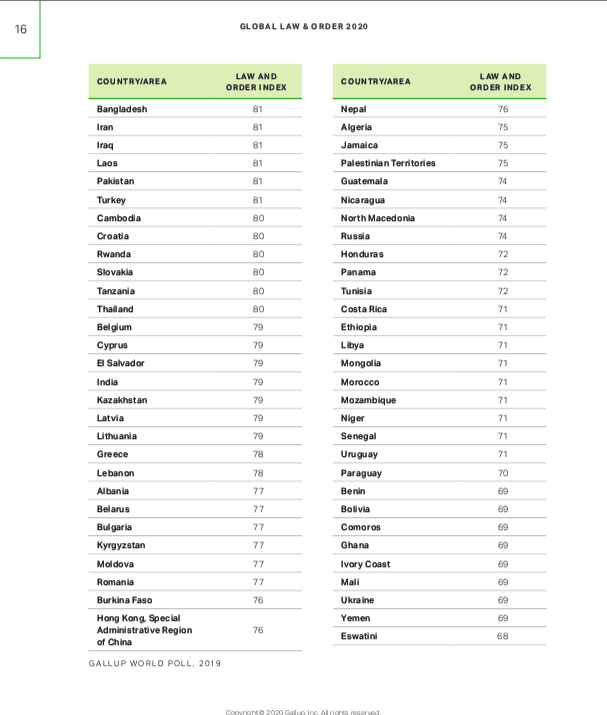 Overall, the study said that nearly 7 in 10 people worldwide said they felt safe and had confidence in the local police.

“In most economically developed countries with a strong rule of law, most residents say they feel safe walking alone in their areas at night. This response is nearly universal in Singapore and tops 80 percent in many Western European countries. The same is true for more highly state-controlled countries.”

Contrastingly, people in Latin America and the Caribbean were “least likely” to feel secure in their communities, Gallup noted. Southeast Asia also slightly ranked higher than the United States and Canada.

According to the study, the index “provide(s) a baseline for how the world will respond to the challenges that have surfaced during ensuing crises. Additionally, it also includes those related to law enforcement in the US and elsewhere.”

The peaceful country of Singapore topped the Gallup poll with a 97 global index score. Besides the Philippines, several nations in Southeast Asia made it to the top 50 list. They are Indonesia (89), Vietnam (86), Malaysia (83), and Myanmar (82).