One aspect that all English learners consider the most difficult to improve is pronunciation. The fact that English pronunciation has no definite rules compared to grammar even makes it more difficult to learn it. But did you know that there are some useful English pronunciation tips available that help you improve faster? Not only are these rules definite but they’re also very easy to learn. And once you mastered it, your English will immediately sound better and more natural.

Consider the example we have below. Which pronunciation is correct?

I know this got you confused. But worry no more, because today, we are going to talk about some Useful English Pronunciation Tips.

Among the many topics that ESL learners always mix up is the rules about pronouncing past forms of the verbs and s sound at the end of English words.

In this article, I will walk you through the rules that you need to learn so that you can improve your English communication skills.

Are you ready for the discussion? Well, let’s start!

I. Useful English pronunciation tips for past forms of Regular Verbs.

In English, one topic that confuses ESL learners is the correct pronunciation of past forms of the verb.

However, there is one EXCEPTION to this rule.

Grab your pen and paper and don’t forget to remember this: Pronounced words ending in -ed as /d/ when it’s a verb, and pronounced /id/ when it’s an adjective.

Through his studies, he learned a lot, and now he is a learned man.

The pronunciation of S at the end of plural nouns, verbs in the third person, and as a part of the possessive case sometimes causes confusion for non-native English speakers because it can be pronounced differently in 3 ways: / ɪz /, / s / or / z /.

In English, the pronunciation depends on the last sound of the verb or noun, which is usually a consonant.

But before we discuss the pronunciation rules on ‘s’ sounds, it would be necessary to have a review of the different consonant sounds we have in the English language: The Voiced Sounds, The Voiceless Sounds, and the Sibilant Sounds.

Voiced consonants require the use of the vocal cords to produce their signature sounds. These sounds produce a vibration or humming sound in the throat when they are said. Put your finger on your throat and then pronounce the letter d. You will notice a slight vibration in your neck/throat. Other voiced sounds are g, b, v, etc.

Voiceless consonants do not use the vocal cords to produce their hard, percussive sounds. Instead, they’re slack, allowing air to flow freely from the lungs to the mouth, where the tongue, teeth, and lips engage to modulate the sound. For example, k, p, f, etc.

Another sound that is relevant to this is the sibilant sound which is produced by forcing air out toward your teeth. It is characterized by a hissing sound (sssss), a buzzing sound (zzzzz) or the sound teachers make when they want you to be quiet (shhhh!).

And now that you already know the difference between voiced, voiceless, and sibilant sounds, we can look at the following rules for the correct pronunciation of S at the end of words in English.

Always remember that the pronunciation of the final S in plural words and verbs in the third person depends on the final consonant sound before that S.

After a voiceless sound, we pronounce the ending ‘s’ as /s/.

However, we pronounce the ‘s’ as /z/ after a voiced sound. 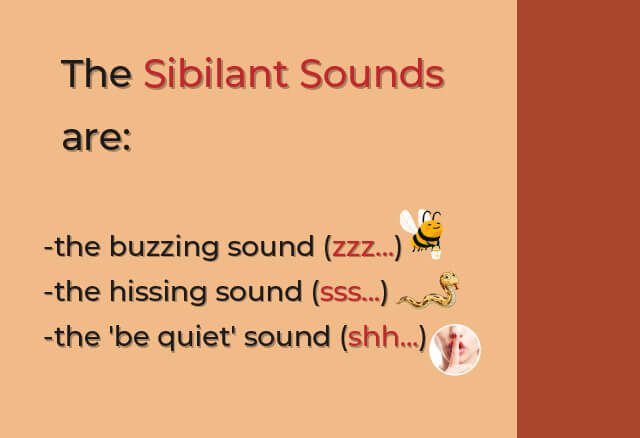 When do we pronounce the /iz/ sound in English words ending in the letter s ?

Sometimes, this sound is written as /əz/ and uses the symbol “schwa” or “upside down e” before the z. To make it more comprehensible, we will write this sound as /ɪz/ or /iz/.

If the last consonant sound of the word is a sibilant sound (a hissing or buzzing sound), the final S is pronounced as /ɪz/. This /ɪz/ sound is pronounced like an extra syllable. (e.g. the word buses has two syllables).

If the sound has a J sound (/dʒ/ like the letter J at the beginning of the word jacket or /ʒ/ like the S in pleasure), then the final S is also pronounced as /ɪz/.

Now, let’s look at the example words ending in the /ɪz/ sound in our chart.

To summarize, the RULE is THIS: After verbs ending in -sh, -ch, -ss and -x, we add the -es to the end of the verb (in the third person) and the pronunciation is /iz/ as an extra syllable.

We are done with the /iz/ sound and this time, let’s talk about /s/ sound.

When do we pronounce the /s/ sound in English words ending in ‘s’ ?

If the last consonant of the word is voiceless, then the S is pronounced as /s/. Be careful not to create an extra syllable.

Please always remember that the consonants c, s, sh, ch and x are voiceless although they use the sibilants ending seen above.

Examples of words ending in the /s/ sound:

We pronounce the ‘s’ as /z/ (without creating another syllable) if the last letter of the words ends in a voiced consonant. This Z sound is like the sound a bee makes zzzz.

We also use this ending when the word ends in a vowel sound (e.g. bees, flies etc.)

Examples of words ending in the /z/ sound:

The first rule is about the three ways of pronouncing the S at the end of a word in English.

B. When the verb ends with voiceless sound, pronounce the -ed as /t/ except for those ending in /t/ sound.

C. When the verb ends with voiced sounds, pronounce the -ed as /d/ except for those ending in /d/ sound.

The second rule is about how to pronounce the S at the end of words in English.

A. We pronounce the final ‘s’ as /ɪz/ if the last consonant sound of the word is a sibilant sound (a hissing or buzzing sound).

B.  Pronounce the ‘s’ as /s/ if the last consonant of the word is voiceless.

C. We pronounce the ‘s’ as /z/ if the last letter of the words ends in a voiced consonant.